Can you remember the last grade you received? How much of an influence did it have on your life today?

What does a grade tell us about ourselves? Experts on the subject claim little to nothing. Yet with an age-old system rooted in state exams and test scores, this is a hard pill to swallow. Mark Barnes and his movement Teachers Throwing Out Grades are attempting to rid our system of the grade altogether as others begin to question its value, or more importantly, its credibility. As we continue to ask how we can measure student learning accurately, the objectivity of grading and its relevance within the ‘real world’ are coming under scrutiny.

The Subjectivity of Grading

George Couros in his recent article ‘The “Answer” is Not Always the Right Answer’ attempts to shed light on the subjectivity of grades using the example of a Starbucks drinks promotion. Couros explains how he fell one sticker short of winning a free drink, when a staff member overlooked this deciding factor, awarding him the drink anyway. Similarly, Mark Barnes in his article ‘4 Reasons Every Teacher Wants to Stop Grading’ uses his daughter as an example, who received a D grade for a score of 70%, one which would most certainly have differed from school to school. Both examples, although very different in nature, accurately display the subjectivity of grading, as something completely dependent on the individual awarding it, thus rendering it meaningless.

With the subjectivity of grading stealing the limelight, obvious questions arise: How do we make the measurement of learning objective? Is it possible to measure student learning at all if we are all different and thus learn in different ways, producing different outcomes? Many will arrive at the conclusion that measurement of student learning and performance has always, and will always, be subjective, and student success lies squarely in the hands of the ‘educated guesser’. Others are looking to technology for an alternative to traditional grading, focusing on the prospects of personalization and competency-based progression.

Personalization is based on the idea of personalizing the learning experience for every student, identifying individualized learning paths with tailored resources for students to engage in independent learning and critical thinking. Adaptive systems came up with the solution as a response to the familiar challenge educators are faced with of reaching every single student in a classroom when each learns at a different pace, and in a different way. Competency-based progression attempts to override traditional forms of grading, assessing students rather on demonstrated mastery of learning, as opposed to generic tests on completed units of a textbook; measuring learning as opposed to time. This form of assessment is more informative and less subjective, as learning is personalized and measured on a continuous basis, as opposed to at the end of each unit, or term.

Adaptive systems like Fishtree are combining personalization and competency-based progression to offer the most accurate picture of student performance and learning. With the help of analytics, the system can translate how a student learns in a way that has never before been possible.

Yet, as technology providers continuously attempt to provide more sustainable solutions for measuring learning and achievement, most schools remain buried under a system that keeps grades as its focal point. Churning out grade after grade under which students are categorized and judged, the fate of each student is decided. As we encourage students to train for the final race, are we really preparing them for what awaits at the finish line?

Let’s just hope they don’t expect a job in Google.

P.S. If you liked this post, you might want to check out fishtree.com. Start teaching with the 21st century learning platform today… the ideal solution for flipped, blended and mobile learning!

Lorna Keane is a teacher of French, English and ESL. She specializes in language teaching and has taught in second and third-level institutions in several countries. She holds a B.A in languages and cultural studies and an M.A in French literature, theory and visual culture. Follow her on Twitter or connect on LinkedIn. 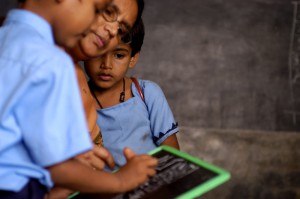 You Cannot Teach a Child You do Not Know
“Children learn at their own pace. It’s inconvenient. It’s terribly...
Shares