I often wonder why ‘dropping out’ of school was given it’s title. The term implies a wilful action on the part of the student, not too far removed from ‘giving up’. With so many students ‘giving up’ on school every day, do we really know the truth behind this phenomenon profoundly affecting the future of our youth?

Push, Pull and Falling Out Factors

Research on the topic has identified a framework on which to understand the dropout dilemma, with three primary factors outlining the root of the problem: push, pull and falling out factors. While the meanings may seem obvious, it’s worth explaining the difference between the three. In short, pull factors are concerned with those beyond a student’s control, whether it be a family situation, an unexpected pregnancy or financial difficulties.

Push factors on the other hand are those which tend to ‘push’ a student towards the door, which include “tests, attendance and discipline policies.” This brings us to the less obvious falling out factors, described here as: “When a student does not show academic progress in schoolwork and becomes apathetic or even disillusioned with school completion. It is not necessarily an active decision, but rather a “side-effect of insufficient personal and educational support” (p.293).

Wikipedia further expands on the cause of dropouts in the US, pinpointing the factors of poverty, bullying, family crisis, depression, and crime. Yet, two factors that emanate across the board are those of poor grades and boredom. These are the factors that remain within our grasp, which need to be analyzed in an attempt to bring positive change to our system, and to stop contributing to the dropout epidemic to such an extent.

While I am of the opinion that boredom and poor grades are linked in more ways than one, for argument’s sake, let’s view them as individual factors. Many will agree that our education system places far too much emphasis on grades, and not enough on learning. As educators, we often witness students throwing in the towel as a result of repeated poor grades and underachievement on the academic scale. Bad grade after bad grade sends a student down a depressing spiral of self-doubt. And with such emphasis being placed on the grade as the measure of all success, is it any wonder that students become disillusioned with school and convinced of their lack of prospects? With the added pressure and stress that grades ensue, our obsession with the test score continues to alienate students with different needs, pushing them to the point of no return.

Boredom generally arises from lack of a challenge. With thirty plus students bundled into a classroom, each being asked to consume the same content, and reach the same goal, it’s no big mystery why many would rather stare into space. Boredom may seem harmless and often unavoidable, which is sometimes true. Yet, with boredom comes a lack of motivation to challenge oneself; to continue learning; to develop both professionally and personally. Unfortunately, boredom has become an accepted component of the learning process for the majority of our youth, something which directly contradicts the very nature of education – as something that presents a stimulating challenge and the motivation to excel.

The introduction of technology into the learning sphere has undoubtedly contributed to the decreasing number of students ‘giving up’ on school each day. With adaptive platforms that can now scale 1:1 instruction to make the learning process as personalized as possible, the needs and interests of every student are being recognized at a rate that was never before possible. Through personalized learning, students are offered a learning environment that works for them, adapting to their personality in terms of pace, resources, and mastery of skills. With more of a focus on each student, they feel valued, stimulated, and motivated to learn. As competency-based progression begins to alleviate the pressures of bad grades, personalized resources are tackling boredom by speaking the unique language of every student.

Fishtree’s adaptive learning platform combines both competency-based progression and personalization to tackle the ‘push’ factor affecting so many school-goers. By offering students an element of control over their own learning paths, they develop personal learning goals that work for them, instead of struggling to keep up with an entire class. Proven to significantly increase levels of engagement, Fishtree accelerates retention, offering students a better learning experience, and boosting performance and progress. By incorporating this kind of technology into their pedagogy, educators can provide a 1:1 method that finally allows every student to stand up and be counted, encouraging a ‘push’ towards mastery, as opposed to the door.

P.S. If you liked this post, you might want to check out fishtree.com. Start teaching with the 21st century learning platform today… providing the ultimate 1:1 learning experience!

Lorna Keane specializes in language teaching and has taught in second and third-level institutions in several countries. She holds a B.A in languages and cultural studies and an M.A in French literature, theory and visual culture. Follow her on Twitter or connect on LinkedIn. 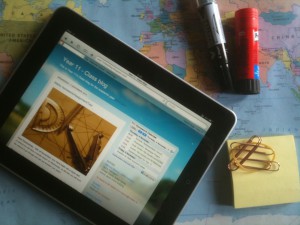 5 Common Myths about Teaching with Technology
Myth #1: Technology is ‘Disruptive’ The ‘disruptive’ label is commonly...
Shares