How should we define digital literacy? Educational leader and PhD student, Lynnea West, explains her research on the principle ways of redefining education through technology, using digital literacy as a key driver: “I would hope that moving forward, we just call them ‘literacies’ and they’re just considered essential components of good literacy practices. We’re living in an online world and digital tools are our reality, so literacy in the broader context is just how we make meaning of what we’re reading or interpreting and how that joins together with our place in the world.”

The concept of digital literacy has been broken down in numerous attempts to define what constitutes a ‘digital native’ and what skills are central to our understanding and interpretation of digital content. Lynnea argues the key to fostering a digital mindset lies in the emphasis of critical thinking. “Critical thinking has always been emphasized in literacy skills but they become much more apparent when it comes to interpreting digital content”, she says. Referencing the work of Dr. Julie Coiro and Donald J. Leu, Lynnea explains, “there’s actually no real correlation between how well a student reads on paper and how well a student can read in a digital environment, so you have to teach those skills and strategies really explicitly about analyzing and evaluating.”

The Evolution of Literacy

Lynnea outlines how digital technology has changed the way we interact with text, taking a more collaborative approach to the way in which we make meaning. “Before, it was like: ‘Here’s your paper, do your worksheet’. Now, we have the opportunity to represent our thinking using visual images in a collage, or by creating a video, so we have a lot of different ways to respond to reading. We also get the opportunity to create meaning together. For example, when responding to a concept, you can create your meaning and demonstrate that through a video. Then, your students can reply to that video and the story gets continued. So it’s not just this singular piece anymore, it’s this dynamic and multimodal process, it’s a back and forth, and it’s collaborative.”

Lynnea describes technology’s potential to give every single student a voice, showcasing student creativity and critical thinking skills like never before. “If you have a student who is somewhat quiet in a face-to-face conversation, they may just need that time to process, think, listen and then reflect later, and have their voice heard. So you can use technology to increase student voice in a way that they’d never have been able to before.”

There has been widespread debate on the topic of the digital native, and whether or not the digital generation should inherit the title. Lynnea explains her logic that it’s not simply a question of ‘being’, but rather of ‘becoming’, a digital native. “I’m not in the generation of the digital native but I can certainly navigate my way through technology”, she says. “I don’t think it’s as simple as you are or you aren’t, I think you can be developed in whatever it is that you want to do. Anything, if you have that growth mindset, you can take to the next level.”

While most educators are moving towards this digital mindset, many remain reluctant to embrace the ‘digital native’ status. Lynnea argues that much of this reluctance boils down to the fear of letting go. “I think there are some teachers who have been teaching with pretty impressive results, who feel a sense of mastery, and it’s really uncomfortable to let that go”, she says.

Another reason for such reluctance, Lynnea explains, is the blurring of lines between students and teacher, as the traditional school structure begins to change shape. With educators now being urged to join in the learning cycle with their students, the idea of taking a back seat remains frightening to some. “It’s going to continue to change and evolve, and I think the students will be the drivers of that, and that makes the lines a little blurry between teachers and students… Who’s the learner? And who’s the teacher?”

While many may grimace at the idea of these blurred lines, Lynnea is excited at the prospect of students taking the reigns. “To me, this is awesome. I have two kids, and if they can be put in the role of leader at the age of eleven, then great. That’s a sense of mastery and accomplishment. It’s exciting to me to have those roles a little more blurry”, she says.

As literacies continue to evolve and adapt to our more complex, digital surroundings, the skills at the center are gaining more significance than ever. Could critical thinking be the key driver in our quest for the ‘digital native’? Should educators take a step back to promote the innovative mindset of the 21st century? Are we essentially foreigners in the land of the digital generation? Perhaps it’s time for us to indulge in some critical thinking of our own.

P.S. If you liked this post, you might want to check out fishtree.com. Start teaching with the 21st century learning platform today… the ideal tool for adaptive, blended and mobile learning!

Lorna Keane is a teacher of French, English and ESL. She specializes in language teaching and has taught in second and third-level institutions in several countries. She holds a B.A in languages and cultural studies and an M.A in French literature, theory and visual culture. Follow her on Twitter or connect on LinkedIn. 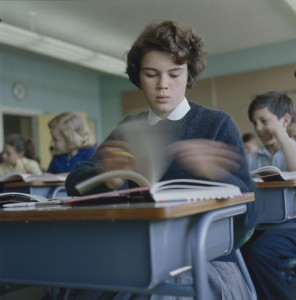 The Fate of the Textbook in the Paperless Classroom
In 2012, U.S. Secretary of Education, Arne Duncan declared: “Over...
Shares